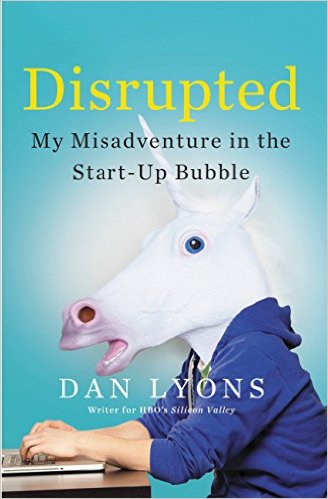 This book is a must read for anyone currently working in a Silicon Valley type of startup. At first it sounded like a lame series of excuses coming from older man who can’t adapt to the startup trend, but if you stick to the book you realize Dan Lyons has some serious points. Being a journalist and a satirist (he used to ran the famous Fake Steve Jobs blog), and a little bit of a complainer, Lyons gives a full blown, no censorship view of what actually happens inside a tech startup.

I don’t agree with a lot of the author’s views on the start-up culture. He’s either overly exaggerating or he’s being overly sensitive about things which are just different than the status quo. There is also a lot of points I do agree on. The start-up cultures seem to be a combination between kindergarten and a frat house. This is very true. Where old financial companies and banks are on one end o the spectrum, these companies are completely on the other hand (it’s no joke when he mentions that if you don’t go for drinks after work with your colleagues it might, and it will be used against you, and viewed as “lame” because you’re not a team player and you don’t get involved).

Here is the HubSpot’s (the subject company) co-founders’ response to his book: (SPOILER ALERTS)

HubSpot’s Response to the Book

It is an incredible story, with some nasty twists. But more importantly, other than one man’s re-discovery and colorful language, the man question becomes: are we in a tech bubble where hipster kids run multi-million dollar companies where their burn rate is fueled by cheap money printed by the Federal Reserve? What do you think?