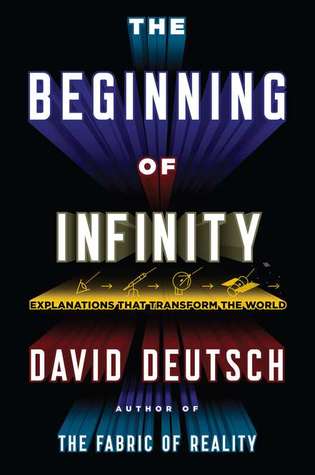 Beginning of Infinity is one of the most complete book written on what it means to be human and intelligence, covering a wide range of topics such as quantum computing, philosophy, psychology, politics and climate change.

It is one of the most comprehensive pieces of literature for someone interested in learning, in plain english, about very complex topics.

David Deutsch has an amazing quality of presenting an idea and then attacking it from all angles, trying to break it, until a logical conclusion is drawn.

The book is focused on the scientific revolution created during the enligntment era. He argues that advances in technology is based on knowledge, and that knowledge itself is acquired by having a societies who encourage education itself and questioning of the status quo – ie the need for explaining everything.

One of my many favourite ideas of the book is the “Earth ship”. Deutsch explains how sending a spaceship to colonize outer space is no different than how we currently live on earth. A ship that needs to support life across a few generation might seem like a crazy place from where there’s no escape and that the survival of the people is dependant of how well they manage their internal resources, including how they govern themselves. Although we look look at planet Earth as “home” and as a ‘safe’ place to be, it’s really not. It’s the advancement in technology that helps us a lot more than anything else. Imagine how long you could survive naked, outside, in the middle of the winter. So our own planet is not sheltering us from anything – if anything it’s trying to kills us, therefore our own survival and success solly depends on our knowledge of how the world works, which in turn helps us develop technologies to better ourselves.

Another important point of the book is the infinity itself. Deutsch argues that every time there is a new scientific discovery, it opens an unlimited amount of possibilities for advancement. From ancient Athens to modern day quantum computing, the book takes us through a journey of qubits (quantum bits) and parallel multiverses with a common history. Another main idea is that humans will always have new problems to solve and that we will never finish discovering everything. Overtime we have a new view on a theory we are at the beginning of a new infinity.

In terms of current affairs, Deutsch proposes a remarkable and eye opening idea regarding climate change:

The entire world is pumping a vast amount of resources and wealth into cutting down emissions which, in turn, will eventually lead to catastrophic outcomes for important fields such as agriculture. Everyone agrees with this. But what most people miss, is that almost nobody is putting any kind of effort into trying to solve these problems if (when?) they eventually occur. For example, some of the money and effort that goes into helping cut emissions by such and such until 2050 could be better put to use in research and development for creating such devices that can automatically extract the emissions from the atmosphere. In other words, let’s try harder to work on fixing a problem, not only to prevent it – because maybe (and we really don’t know) it’s too late for prevention.

I truly enjoyed reading this book and highly recommend it. Although it explained a lot of things, this book left me with more questions than answers and I think that makes the most sense.

“[…talking about the fall of ancient Athens] Like every other destruction of optimism, whether in a whole civilisation or in a single individual, these must have been unspeakable catastrophes for those who had dared to expect progress. But we should feel more than sympathy for those people. We should take it personally. For if any of those earlier experiments in optimism had succeeded, our species would be exploring the stars by now, and you and I would be immortal.”

I learned that we each play a role in the advancement of our species and that questioning everything and explaining why things happen they way they do is the key to technological advancement, which in turn is key to our own success.