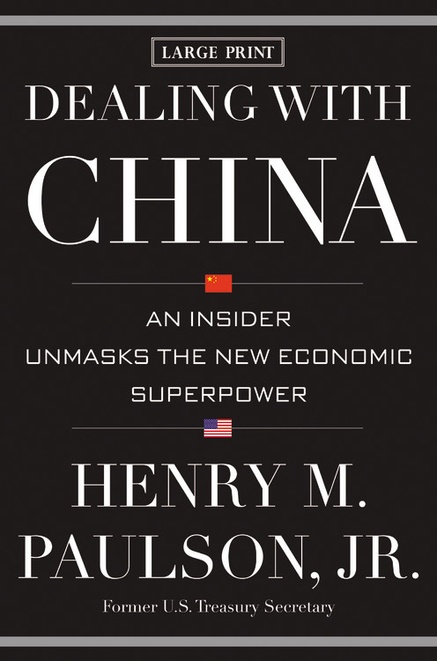 You might have noticed that lately pretty much everything is made in China. You might have also noticed how Chinese influence around the world is growing really fast. This book offers an amazing insider view of how China managed to go from dirt-poor to world super power in less than a generation. China managed to move 440 million people from farms to the cities in less than 30 years. By comparison, the entire population of the European Union is 508 Million.

Every country has its own social, economical and political challanges to deal with, but one must agree Chine’s problems are on a different scale. Paulson is a an american banker which served as the Secretary of Treasury during the Bush administration. He also held the title chairman and CEO of Goldman Sachs, so what better way to get a really nice “fly on the wall” view of high-level discussion and strategies for bringing Chine up to speed as an economical super power. The author offers a very detailed account and timeline of issues China had to deal with, the mistakes it made, the good things it did. One of the most interesting thing I learned in this book is the following: the Chinese people are extremely patriotic, but not in a fanatical way. They understand and they do put the greater good on first place. They also understand that, in order to bring everybody in China to a relatively good standard of living, some people must get rich first, and those people’s responsibility is to pull the rest with them (by creating a consumer market inside China).

Another interesting fact is how China’s economy works. It is a true hybrid between Communism and Capitalism. When the reform started, the farming was done using cooperatives which took everything from the workers working the land and payed them in return small salaries. After the reform, the cooperations remained, however, each farm / food producing unit has a quota to meet (for the state). If they choose to produce more food than the quota, then there’s a free market in which you can sell your stuff. In other words, you have a minimum income assured, and if you want to get ahead, you work/produce more. This incentivized an army of entrepreneurs to take advantage of this newly created economic reform.

I highly recommend this book to anyway interested and curious on how high level problems are discussed. Although it’s still the USA that has the upper hand in the world economy, China has definitely been doing something right in this reform – and a tight cooperation between both countries will yield economic prosperity for both.